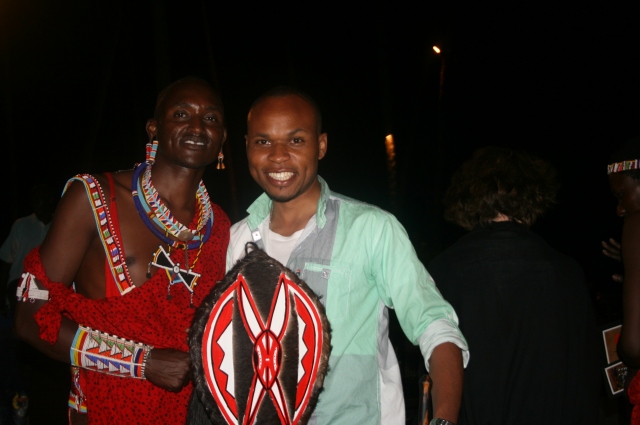 Pose with a Masai warrior

In the month of August 2013, I traveled down to the Kenyan coast to attend a friend’s wedding in which I was honoured to be a groomsman. In true Kenyan style, I combined this undertaking with a little fun and pleasure.

I was putting at the Kenya Bay Beach Hotel which is one of the older hotels along the Mombasa North Coast. The hotel still boasts an ambiance of the 70’s architecture, pristine lawns, access to a long wide beach and most importantly, pleasant staff to serve guests through-out their stay.

Every evening after dinner, the hotel organizes some entertainment for the guests. On one of the evenings, we had the pleasure of being entertained by Masai warriors and ladies in their full traditional regalia!

The Masai dance was definitely an avenue for the warriors to showcase their charisma. The warriors jumped high up as they sounded a deep-chested hum in unison. In erratic intervals some of the warriors screamed war cries amid the hum as they jumped to the front of the group and performed several jumps as they shook of their long braided hair pained in red ochre. The warriors brandished their weapons and shields as they performed this dance in an uncoordinated show of might. After the dance, the warriors marched in a single file and formed a circle while moving slowly showing off their regalia and weapons, whilst maintaining the low deep hum that resonated from within their chests and to the audience.

After the dance by the warriors, the Masai ladies brought out their ornaments and ‘shukas’ and created a mini-market right at the hotel square that used as the performance stage and created a full Masai market feel. The guests sampled the bead necklaces and the bracelets which the Masai people are popular for adorning themselves with, and haggled for better prices in the true style of an African market!

Masai Market is on!

It was so much fun joining in the dance, and I also bought myself some bracelets to remember my interaction with the Masai morans!