It had been seven days of travel, but even the fatigue did not dampen the spirit of the adventure enthusiasts! With such a bunch of adventurers it was easy for me to reaffirm my resolve that I will be a life-long sucker for adventure and travel! 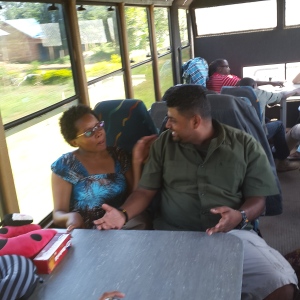 An animated discussion on our way down from Kampala

We left Kampala headed into Kenya through the border town of Busia. We had been afraid that the queue at the border would have been long and therefore delay our schedule, so we left quite early in the morning. Despite having done everything according to plan, we still experienced delays at the border as the Ministry of Health officials on the Kenyan side had to take us through the Ebola screening.

The beautiful sunset as we made entry into Eldoret

We eventually made it to Eldoret at dusk, The Beast clambered his way through a narrow rough road that led down to a tranquil riverbed that hosts Naiberi River Campsite which is designed to take its guests way back to the stone age with a little touch of modern day luxury. Darkness quickly set in and we did not have much time to explore the campsite. We however had time for a little catch-up party in my room! These adventurers are certainly an unforgettable lot! 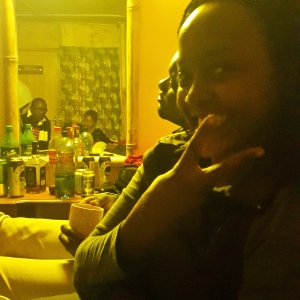 As we had been warned by the Team Captain Mukhtar, Eldoret was quite cold by night. We dressed warm and the had our sumptuous dinner hurdled around the fire.

In need of that warmth 🙂

The Naiberi stone cave became an instant hit with us. We trickled into the bar to enjoy a drink or two while shooting away on the pool table. The cave is believed to have been once inhabited by the ancient Sirikwa tribe of a bygone age. 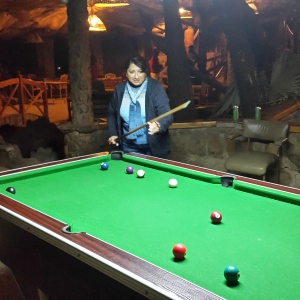 Relaxing in the stone cave bar 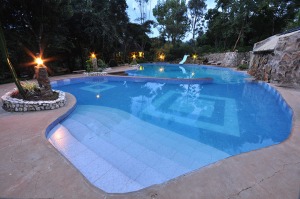 Early the next morning we all woke up to the beauty of the campsite that we hadn’t experienced in the night. The river flowed over rocks making a rhythmic hum which added to the tranquility of the campsite. The cottages stood beautifully built in logs and thatched in straw.They looked like traditional monuments with a touch of modernity. 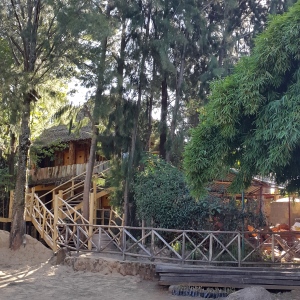 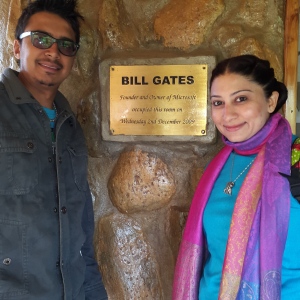 Naiberi River Camp had the honour of hosting Bill Gates on an overnight stay in 2009!

We left Eldoret early with an aim of getting to Nairobi in the afternoon of the eighth day. We made a stop over in Naivasha where we had our last picnic lunch.

It was time to leave Naiberi River Camp, Eldoret

The adventurers took this opportunity to thank the awesome http://www.bunduz.com crew for being extra studious with their work during the eight days adventure!

Adventurers, Shoaib and Mbugua gave a vote of thanks to the Bunduz crew

We left Naivasha, and headed straight down to Nairobi. The eight days journey that had taken us through three countries and treated us to a whole world of adventure was now over. Through this experience, lasting friends had been fostered. Adventurers are a peculiar lot; we were not sad that this trip was over but instead looked at it as an opportunity for us to have yet another tour to a different place and build more memories! We left that duty in the able hands of The Trip Captain, Mukhtar Sidi of http://www.bunduz.com As we say in Kenya; ‘Kazi kwako Mukhtar!’ (The ball is now in your court, Mukhtar)

“A rugged wrestler, that moved with the grace of an angel, and gave the comfort of a mother. I named the truck ‘The Beast’

The man who made it all possible! Mukhtar of http://www.bunduz.com

Eventually we were back to Nairobi, where the journey started! A special thanks to http://www.bunduz.com